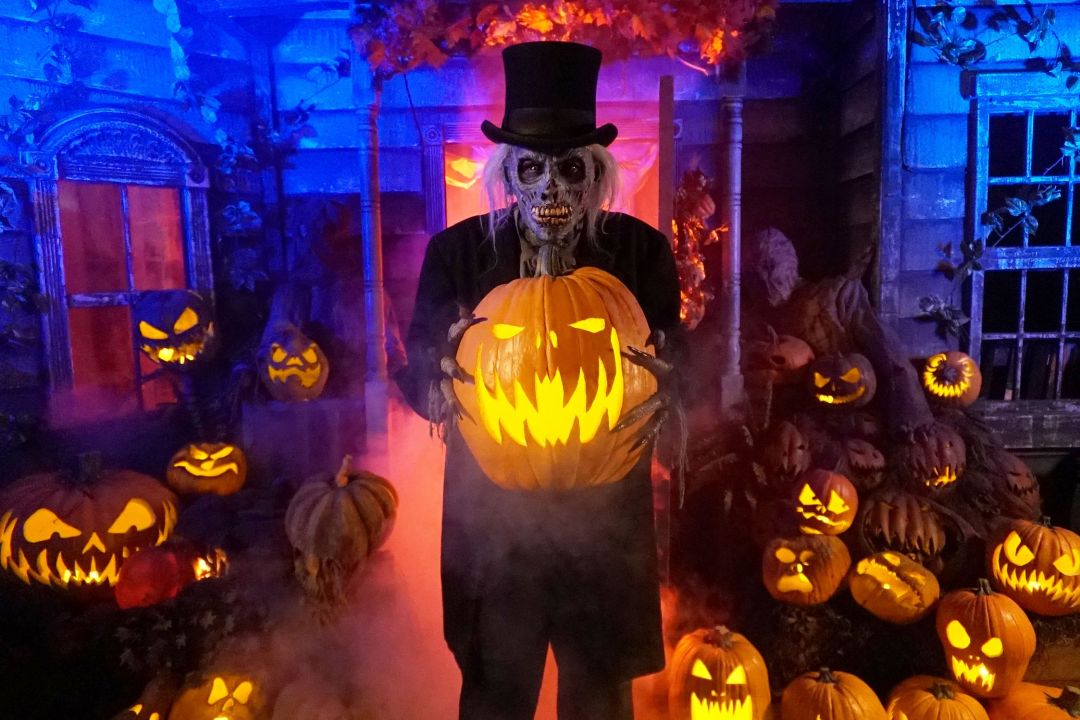 Netherworld – 24 years of fear and fun

Stone Mountain is now home to one of the spookiest addresses in Georgia.

This frightfully fun destination marks one of the nation’s top-rated haunted houses, known to many longtime fans simply as “The Juggernaut” at 1313 Netherworld Way.

Ben Armstrong and his Netherworld co-founder, Billy Messina, always talked about the possibility of a namesake street address, but it wasn’t feasible until three years ago when the enterprise relocated to a 70,000 square foot warehouse, formerly on West Park Blvd.

The renaming was a lengthy process, dragging on for nearly two years. Then, without warning or ceremony, the street sign simply appeared. As Armstrong recalls, “We kind of just drove in one day, and the sign was up — we were like ‘Look at that!’ On July 23, the team excitedly shared their news on their online blog and social media outlets.

With this major triumph under their belts, the crew turned their sights to the upcoming season. In the self-guided, walk-through haunt, guests can anticipate an over-the-top experience featuring dozens of original new monsters and a few familiar surprises. “Halloween Nightmares” will be a memorable experience incorporating some of the holiday’s most frightening and celebrated tropes.

In terms of theme, “Nostalgia was definitely in the cards,” said Armstrong reflecting on Netherworld’s 24 years of lore and fan culture.

The first Netherworld emerged in 1997 out of a haunted house expo at Dragon Con. Just a month later, a group of former film and television professionals and craftsmen pulled off an impressive stunt with Netherworld’s debut season taking place in Kennesaw, GA.

Even then, The Juggernaut was earning its national reputation. When most haunted houses appropriated narratives from popular shows and television, Netherworld set a precedent with its own storyline and unique characters. Icons like “Harvestman” and “The Collector” appeared in the early 2000s, sending Netherworld into a new era of fame and popularity.

In 2007, Haunted Magazine ranked Netherworld the top haunted house in the U.S. Each year, the attraction has continued to earn praise and attention from fans and critics alike, marking metro Atlanta as a destination for haunted house enthusiasts.

In the final years of the twentieth century, Netherworld established its first permanent location at the Georgia Antique Center Norcross. Here, The Juggernaut reached its zenith, expanding from a single haunt to two-headliner attraction with double the effects and screams. The expansion coincided with a relocation to a larger suite in the same building, a space they again outgrew, calling for yet another move in 2017. At its current location, Netherworld pivoted its business model with escape rooms, a laser tag arena and party venues open throughout the year.

Four locations and five addresses since its debut, Netherworld has earned a namesake landmark which distinguishes its popularity in the metro area. Over the various chapters of its history, families have made a tradition of visiting the haunt every year. A generation of kids has grown up and had little Netherworld fans of their own. Following the age-limit policy, these trick-or-treaters will have to wait until they are five or older to be admitted.

“It’s a rite of passage,” said Armstrong. The former television professional shared that some of his employees were once members of Netherworld’s original fan club. Other enthusiasts have met significant others, or even proposed at Netherworld. As of yet, they haven’t hosted a Halloween themed wedding, but under the right circumstances, the creators are happy to accommodate.

In its 24-year history, Netherworld has survived a volley of catastrophes and crises, both real and perceived. In its third year, the haunt addressed the change of the millennium with an “Apocalypse” themed attraction featuring blasted cities and an appearance of the four horsemen. In Netherworld’s fifth year, the nation faced an unprecedented tragedy with the attacks on 9-11. While box offices across the country took a hit, Netherworld’s two attractions “Buried Alive” and spaced-themed “Planet X” drew steady crowds, and despite challenges, the haunt endured.

Given its unprecedented circumstances, 2020 ranks alongside the list of doomsdays and tragedies of years gone by. And although some of us have spent half the year in seclusion, time has indeed marched forward. Halloween is fast approaching.

As Netherworld co-founder Billy Messina said in a prepared statement, “[D]uring this time when nothing seems normal thanks to COVID-19, Who couldn’t use a little spine-tingling fun?”

At this rate, being chased by a chainsaw-carrying monster might be one of the most normal things to happen all year. While that scenario might not be everyone’s ideal means of unwinding, research shows that the right dose of fear can be almost cathartic.

Studies show that being placed in a situation of controlled fear actually relieves stress by emitting endorphins into the brain. As sociologist Margee Kerr, at the University of Pittsburgh said:

“We think it’s very similar, at least at a physiological and neurological level, to the runner’s high experience. . . [once you’re out of the scary situation — one where there was never any real threat to begin with] — feel-good endorphins course through the body, she says. “It is a reprioritizing of energy, of focus into the body. You’re grounded, not being caught up in thinking.” – excerpt from Time Magazine

Experts often relate the phenomena to the pleasure-pain principle and even to exposure therapy which stipulates that being exposed to extremes can be beneficial in overcoming phobias and coping with everyday neurosis.

“The thing about haunted houses in general, you might get startled; you might get scared, but the very next response is laughter, and it’s a cathartic feeling,” Armstrong said via phone conversation. “It’s not the dread you feel over the way things are these days. It’s not like this dark unending worry. It’s more like, ‘Wow! That was fun! That was thrilling! I feel great, I feel alive! And that’s what we are striving for.”

To ensure the safety of this fear-riddled attraction, Armstrong and his partners are working on a detailed list of pandemic guidelines. These policies will be released when tickets go on sale. In the meantime, you can check out web pages for Netherworld’s escape rooms and laser tag arena to see current COVID-19 safety procedures.