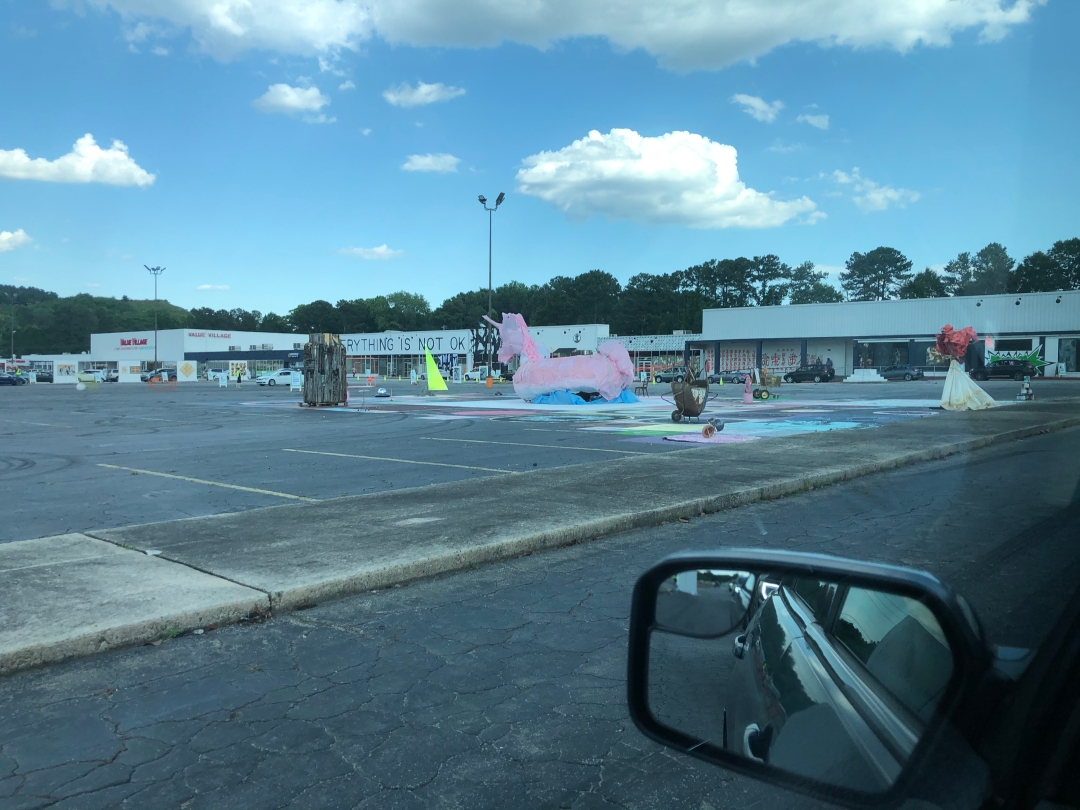 The Drive Thru ATL, A Criticism

The Drive Thru ATL, an all out-door free experimental art showcase designed by members of the nonprofit The Creatives Project (TCP), was by most accounts a smashing success. More than 2,400 showed up from 2-7 p.m. on Jun. 13th for the one-of-a-kind art pop up that brought some Atlanta’s most talented and daring creatives together in the vacated FMK shopping strip off Moreland Ave.

For over a month, TCP organizers had been blasting promotional posts on social media – artists bios, reminders to RSVP, and my favorite, links to free BLM protest posters after the event, originally scheduled for June. 6th, was postponed a week in light of recent social unrest following the death of George Floyd. All this was in good taste, and I was optimistic that the event itself would exceed expectations.

Optimism faded as my party and I neared the lot at 1374 Moreland Ave., which by virtue the TCP’s recent partnership with the Stream Realty Partners who own the entire development, was designated as a venue for the one-day exhibition.

Where I had envisioned an industrial wasteland with rugged warehouses and exposed cinderblock, the partially vacated lot was home to Value Village Thrift Shop, Dollar Tree and other local retail – neighborhood commodities that served an everyday use for a disenfranchised population. The word gentrification came to mind as we neared the extended pile-up of cars, more than a few of those being convertibles and Jeeps bearing middle-aged white passengers clad in Hawaiian shirts and sunglasses.

We approached the exhibit at what felt like a snail’s pace.

Repressing the urge to turn around and drive back to Gwinnett, we amused ourselves by studying the faces of passengers in nearby cars who, with furrowed brows, scratched their heads in confusion, a perfect meme for 2020 overall.

A goliath unicorn sculpture, colors sun-faded like an overused pool floaty, loomed in the background.

Nearly thirty minutes later, we passed the entrance and spotted muralist and painter Peter Ferrari beside his mint work – a mural featuring a graphic black vine and pops of color.

The car in front moved, and we followed so that my unwashed windshield now framed Brandon Sadler’s Japanese calligraphy. The black lettering read like a book across an entire wall.

My companions and I watched Sadler create a new piece in real time, using a fan and black and white threads to create a wall-sized textile.

Above a vacated store front, a sign by Jason Kofke read in all caps, “EVERYTHING IS NOT OKAY.” Given the headlines I’d heard that very day about the protests, the riots, the police-inflicted violence, I could not have agreed more.

While I contemplated this, a few works by Mike Stasny caught my eye: gold skulls mounted to a makeshift wall along the Drive track — glittery, flashy symbols of death. Beside them was a photo of a bear with seven heads layered one on top of the other. A visually jarring and undeniably attention-grabbing piece of work.

Entering the 2D aisle, I saw the narrative-based photos of Artemus Jenkins, Chloe Alexander’s insightful illustrations, and EuGene Byrd’s thought-provoking acrylic pop art. Many of the artists stood beside their work in June heat, but I didn’t have a chance to catch their eyes as we skirted past onto the next makeshift wall.

One artist I was happy to discover is the unforgettable Sachi Rome, an abstract painter whose work is blurred, ambiguous and unmistakably afro-centric. Defined by bright colors and bold strokes which add texture and dimension to a subject’s face, her work was a highlight of the show – in fact I would have come all the way even if it was only to see her work.

Other gems in the exhibit were Jerushia Graham’s pristine paper cut outs. Easily mistaken as ink drawings on canvas, her work is characterized by the contrast between her black subjects and their white backgrounds. Precise lines add to the sharpness of her work, which resembles the polar political state in which we find ourselves.

From the event’s Instagram campaigning, I was already familiar with the work of Scott Silvey, although it was the delicacy of his hand-stitches and brush strokes, carefully tracing the lines and blemishes on leaves and other natural artifacts, that sparked my interest – something I would have missed entirely from the brief exchange with his exhibit.

As we left, I noticed a woman, who I later learned was the performance artist Claire Molla, doing a number of energetic jumping squats as she held a cardboard sign. I couldn’t read what it said, but in turning my head I noticed something hadn’t in the store front sign by Jason Kofke – thinly outlined letters spelled a hidden message behind the sign. “EVERYTHING WILL BE OKAY.”

Only after the show was over and I revisited the event’s site, did I realize how much was packed into that brief little tour of the parking lot off Moreland Avenue. In such a short and rushed amount of time, I was unable to take in the quantity of talent and full depth of the work being showcased.

The organizers managed to pack performance, photography, mural, mixed media, textile work and traditional paintings in the event that featured all local artists. While not all were my personal preference, the talent and out-of-the-box brazenness of the concept could hardly be missed.

But with the presentation, I would have liked to see them push the envelope further still. Most of the work was displayed on makeshift walls and on a scale too small for this kind of viewership. But then, perhaps expecting story-high canvases and paintings hanging from the sky from fishing wire at a free event was asking for too much on my part.

Of course, the flow of traffic didn’t help. Where we spent thirty minutes in wait, it took barely fifteen to see the entire exhibit.

In theory, a drive through art exhibit is a great idea – novel enough to excite stir-crazy from across the Metro area while following social distancing and CDC guidelines. But it was a bit frustrating to not be able to step out and examine the art more closely, or even view it at leisure. Being ushered to roll on to the next exhibit, we were rushed and unable to consider all the artists and their work.

Perhaps scaling would have helped – had the displays been larger or projected, or even spaced out so that cars could at least spend a moment on each piece. Whatever it was, something needed to be done to avert attention from the parking lot, the cars and to the art itself.

With all that in mind, would I do it again? Yes. I would. Because while my expectations were not met, I can still appreciate it for what it was – an experiment during one of the most unusual times in living history. This, combined with the passion and clear call for social change have tinted my glasses a rosier hue in color in retrospect.

I sincerely hope there will be a second Drive Thru event. I look forward to seeing how those at The Creatives Project tinker with their experiment and follow through with the momentum of their trial run.

NOTE: It is worth mentioning that the choice of venue was a more conscientious decision than I originally thought. Through a newly struck partnership with Stream Realty Group, The Creatives Project will occupy some of the vacant shops at the FMK shopping strip for its artist residency program which offers fair-priced housing and studio space to approved local artists.

Ideally, this will help emphasize the arts in Atlanta and further TCP’s mission to enrich and strengthen local communities through art education and outreach, while celebrating and elevating the city’s creative talents.