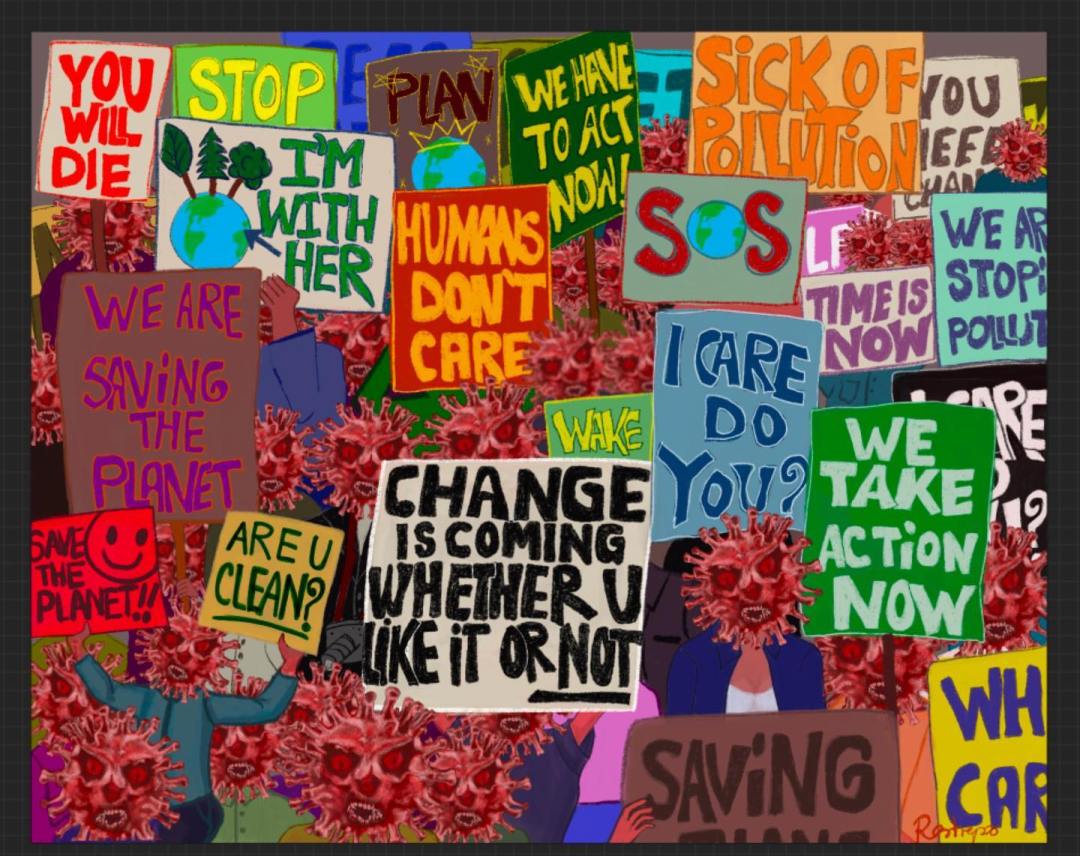 I think we’re going to see a lot of cool art come out of this. . . I feel like people who don’t even make art are learning that it’s a fun way to pass the time no matter what.” — Peter Ferrari

It was the second week of quarantine when I reached out to a handful of artists asking if they’d be interested in answering a few questions about their experiences of the COVID-19 pandemic over video chat. The six artists who agreed to participate vary in age, nationality and craft, but all of them are local and work to make the world a better place with their respective art form.

Thursday morning, I spoke with Peter Ferrari via FaceTime. When I asked him how he’s been impacted by the self-quarantining and social distancing, he replied, “So, for me, my life actually hasn’t been that impacted.” Peter explained that he had just finished several large projects, and other than a few live painting events he had lined up (which of course canceled), he had been planning on locking himself in his new studio and just working.

LYNX Nguyen also said he hadn’t been terribly impacted by the quarantine. Having just wrapped up a show in Greenview, SC where he sold a large painting, LYNX felt like the quarantine corresponded with his shows in an oddly fortuitous way. “It doesn’t affect me at all. It actually help[ed] enhance me,” said LYNX. “I was really lucky. . . my show at the Atlanta Contemporary was open on Thursday, and then the Friday, everything closed down, so it actually worked in my favor.”

But for performing artists and those who work events, restrictions on gatherings of more than ten people severely limits their sources of income.

“I think, just because, I think, 90 percent of my income is shows and festivals,” said Manami Lingerfelt, who creates whimsical paintings from her home in Dallas, GA.

Claudia Restrepo had already paid the fee for a festival in Alabama when the restrictions were enforced, and now she can’t get the fee back. “Ten person maximum to go to an event — who [is] going to buy with only 10 [people]? That is impossible.”

“I basically can’t do any of the things that I normally do. I have no income whatsoever,” said Eugenia Gonzales, who moved to Atlanta from West Virginia Beach specifically for acting.

Brieanna Haberling is simply trying to make the best of an odd situation. “I’m sure you’re aware of theaters in Atlanta being shut down right now or at least postponing a lot of shows and activities. Some theaters are cancelling seasons — really what they’re doing is making sure their artists are safe first and their theaters and their patrons are safe first, you know, as everybody is doing at this time.”  She continues rehearsing her lines and blocking from home, along with many of her peers who conduct video chat group rehearsals as often as possible.

Manami draws inspiration from her customers’ feedback and face-to-face interactions, and so for her, the isolation is more difficult. “To communicate with people has a great kick for my inspiration. But still, of course, as an artist, I have to deal with my loneliness, because most of the time when I work, I cannot work with anybody else but myself,” she said.

Despite the inconvenience, most of the artists I talked to seemed well adapted to the quarantine, even thriving. “As artists, we know that it’s feast or famine, so we’re better about saving money,” said Peter, who is trying to see the situation in a positive light.

One resource most of us find ourselves rich in this quarantine is time, and LYNX plans on using his wisely.

“I don’t know why, but this time I feel like I’m hitting a jackpot, because I have all this time to get ready for when things get better again. Then I’ll ready, I’ll have all this amazing large-scale artwork framed and ready. So, I’m actually taking advantage of the quarantine situation,” LYNX said.

For Claudia, the time away from others is extra motivation to make her work accessible online.

“If this going to keep me in, this is the real moment to do everything on internet,” said Claudia, who is also trying to find ways to a fill a need with her art. “I will keep doing art from my heart, but I keep thinking that in this situation, I need to be a commercial artist.”

From these conversations, I gathered that time and space apart is only making the art community stronger.

“What a lot of my friends who are performers are doing is just kind of video chatting each other. . .  we have this whole thing going now where we try to plan on every day, in some way, connecting to help each other to get through this,” said Eugenia. “So, we all learn a dance or do yoga together . . . or have a time where everybody just sits together and kind of studies something or does something that you’ve been wanting to work on and sit there together and work on it kind of like really cool.” The fire dancer believes the quarantine is forcing artists to come together in new and different ways, resulting in a closer connection between them. “That, I think, is the coolest, most interesting thing, to be honest. I think that’s a way to connect creatively, and I’ve seen people online do it a lot, offering classes free classes. So, it’s an interesting time. I feel like if it weren’t for the fact that [I’m] stressed about money, I feel like I would enjoy it even more.”

And LYNX is learning for the first time the power of community. “I never thought of working with more people and sticking together as a community of artists.” After his shows at the Greenview and at the Atlanta Contemporary were forced to close, coordinators from each of the galleries reached out to create a virtual exhibit with artists so audiences could still connect with his work.

With so much time for internal reflection, it seems only natural that creativity is surging — for artists and laid-off workers (like myself) in need of an escape. And hearing how each of these artists has been impacted creatively, I wonder: Is humanity most creative under restrictive circumstances?

“I think we are more creative now because we know we can’t go out much. So, we find many avenues, many channels to push ourselves out there, and I think this is the creative moment. We are restricted, but we are actually in our most creative stage,” said LYNX.

“I think it’s put us all in this weird surreal reality and getting to just lock myself in the studio intentionally has brought out a lot of creativity that I wanted to try but didn’t have time, and that sort of takes away all the distractions,” said Peter, who has been experimenting by chopping up and repurposing old paintings. He believes the quarantine has in a ‘weird way’ helped, possibly even inspired him to try new things.

Based on their answers, I think Claudia’s work has been most directly influenced by the virus. She shared that she has mixed emotions about everything that’s happening. In the first week, she was happy that world had stopped, and nature was receiving a break from the flights, car travel and human activity. But the next week, she felt overwhelmed with sadness for the families touched by Covid-19 and for those who could not say goodbye as their loved one dies in the hospital alone and in pain. In the process of all this thinking, Claudia created an image of the virus. She painted an anthropomorphic virus woman holding signs amidst a protest. Now, she can’t help but think all of her recent paintings are influenced by the virus.

“When I was painting the corona virus, I searched how the virus looks. But when I look at other stuff, it’s like when you look at the clouds. That you say, ‘Oh I see a bunny.’  When I was looking at the virus I was just looking, looking, looking, and the image just appeared, so I painted that image that appeared,” Claudia said.

While most of the artists I talked to can see a number of silver linings, others fear that things won’t go back to the way they were, and artists may suffer for it.

“It’s just a weird time because part of me has that feeling that the world is really changing,” said Eugenia. “What if the world doesn’t go back to normal, so that people like us that work off gigs and are creative that don’t work normal jobs in society, what if we won’t be able to go back to that the same? Are people going to be spending money on events and paying performers what they’re worth?”

On the other hand, she also believes the world could come out stronger and better able to handle pandemics in the future.

“It’s really interesting time,” says Manami who is optimistic that artists will come out on top. “I think artists [have] been here since beginning of time, and we all survive so . . .  I believe it will be okay, and also, I believe we create the reality from what we believe, so definitely, I believe the world is getting better place.”

“I think we’re going to see a lot of cool art come out of this,” Peter said. “We’re already talking about having some sort of quarantine art show so people can just show everything they made during the quarantine, because I feel like people who don’t even make art are learning that it’s a fun way to pass the time no matter what.”

A few safe ways to support the arts in Atlanta (from your couch or your bed if you want).